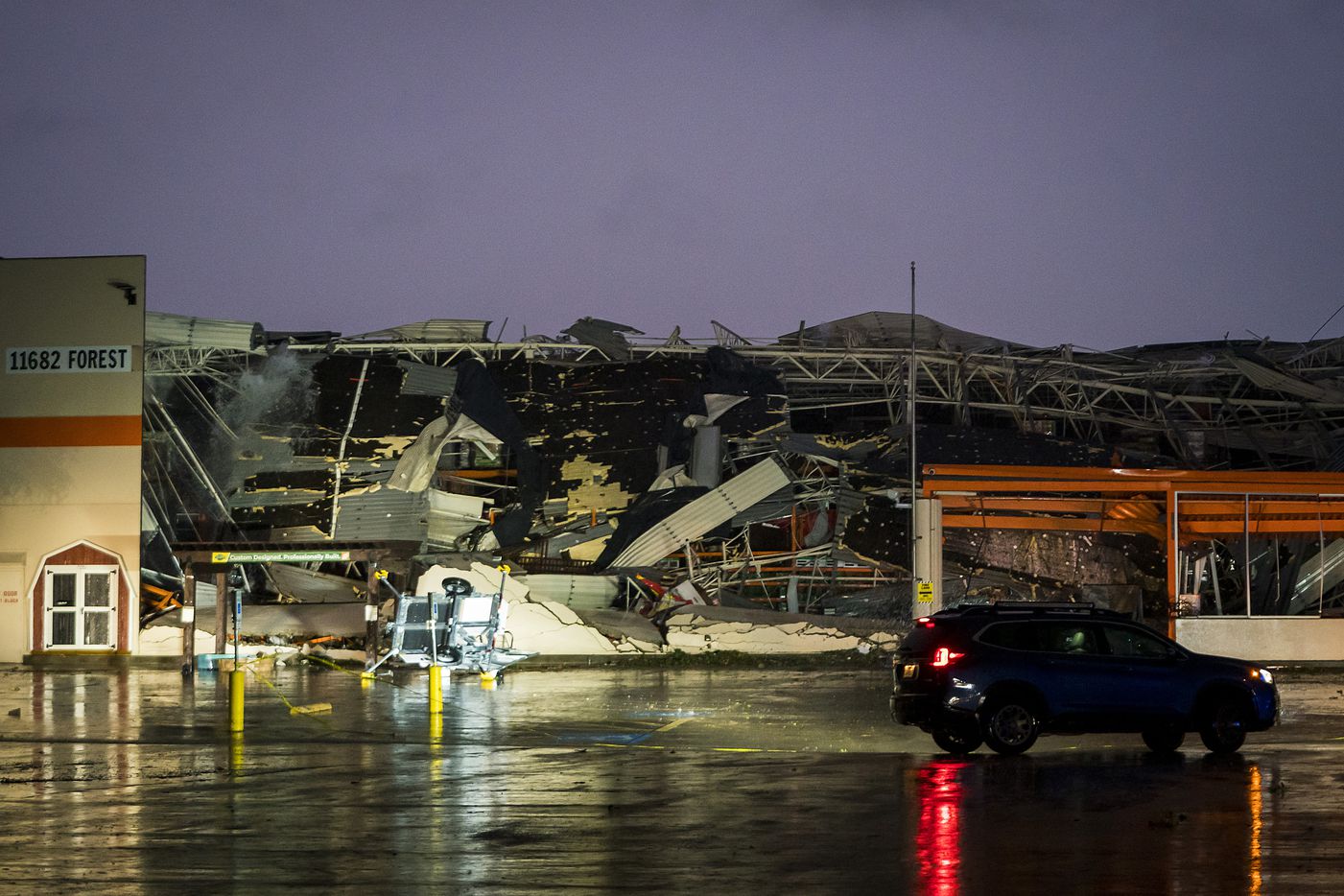 Dallas Tornado Touches Down; Leaves A Trail of Damage

Residents in North Texas including Dallas and Fort Worth are waking up to a trail of devastation after a tornado touched down Sunday evening.

Officials from the Dallas Fire and Rescue Department confirmed that the tornado touched down at approximately 9:00 PM according to a news release. The storm also brought lightning, heavy rainfall, half dollar-sized hail, as well as strong 70 MPH winds that reportedly blew debris three miles into the air and left approximately 65,000 residents without power.

At the time of this writing, according to city officials, there have been three persons who have been hospitalized for non-life threatening injuries and six others who suffered minor injuries when an 18-wheeler was flipped over. No fatalities have been reported, however, Dallas first responders are still going door-to-door doing welfare checks in affected areas.

Whoa… Insane view of Dallas tornado, that moved through moments ago. pic.twitter.com/Uzmzy2JGBA

This is the scene at Walnut Hill and Monroe in NW Dallas. This is awful! Search and Rescue efforts are underway in this area now. Crews going door to door. Stay clear of this area and say a prayer for these folks. @CBSDFW #DallasTornado #txwx pic.twitter.com/kPHgnqEHfl

What Should I Do If My Home Was Damaged By The Dallas Tornado?

When dealing with your homeowner’s insurance, there are plenty of pitfalls that can hurt or even end your chances of getting a fair value for your tornado damage claim. To ensure that your tornado claim has, at least, a fighting chance, take the following steps:

What Happens If My Tornado Damage Claim Is Rejected or I Don’t Get A Fair Value For My Tornado Claim?

The first thing you must know is that your claim is not over and that you can fight the insurance’s decision if it’s been rejected or underpaid.  There are a few options you can take, some that even your insurance may be able to provide for you, however, your best bet is to speak with an experienced storm damage lawyer who has a track record with negotiating and dealing with a wide variety of insurance carriers.

Most storm damage lawyers have the resources and experience to help navigate your storm damage claim and see what exactly is the best option for you.

How Am I Supposed To Pay For A Storm Damage Lawyer?

Most storm damage lawyers actually don’t take a fee up-front. They work on what’s called a “contingency fee” where, if there’s a settlement, it is split between yourself and the handling attorney. They work on the case as an investment and put up all the research, inspection, or even court costs upfront for your case without you having to worry about any of it.

With the storm damage lawyers at Moore Law Firm, if there is no settlement, then you pay absolutely nothing. Our payment system is set up to help ensure that there are absolutely no out-of-pocket costs to you.

Are You Prepared After A Storm Hits? Download Your FREE Copy of the Moore Law Firm Texas Storm Damage Claims 101 Guide 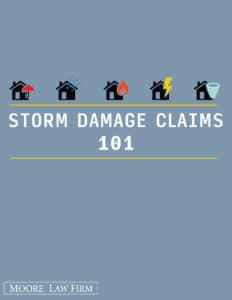 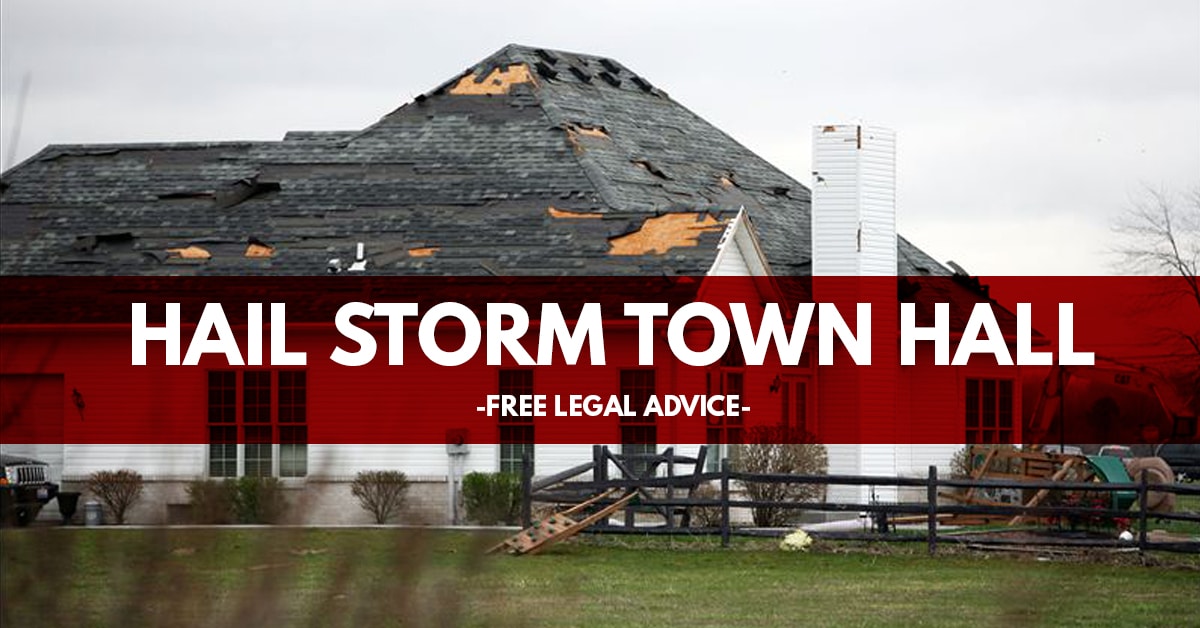 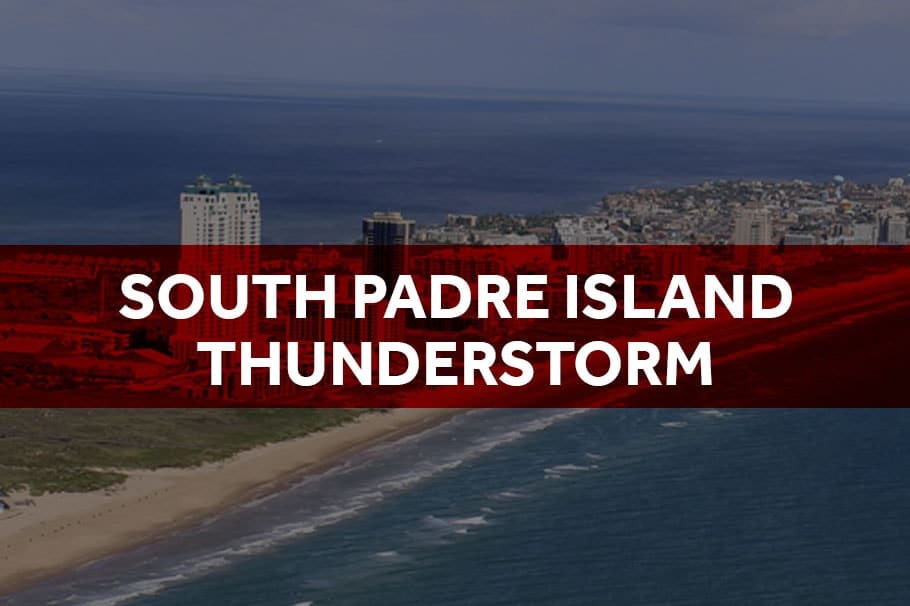 Storm Pummels South Padre Island, Cameron County; Electricity May Be Out For Days

A series of thunderstorms moved across the lower Rio Grande Valley overnight leaving a... 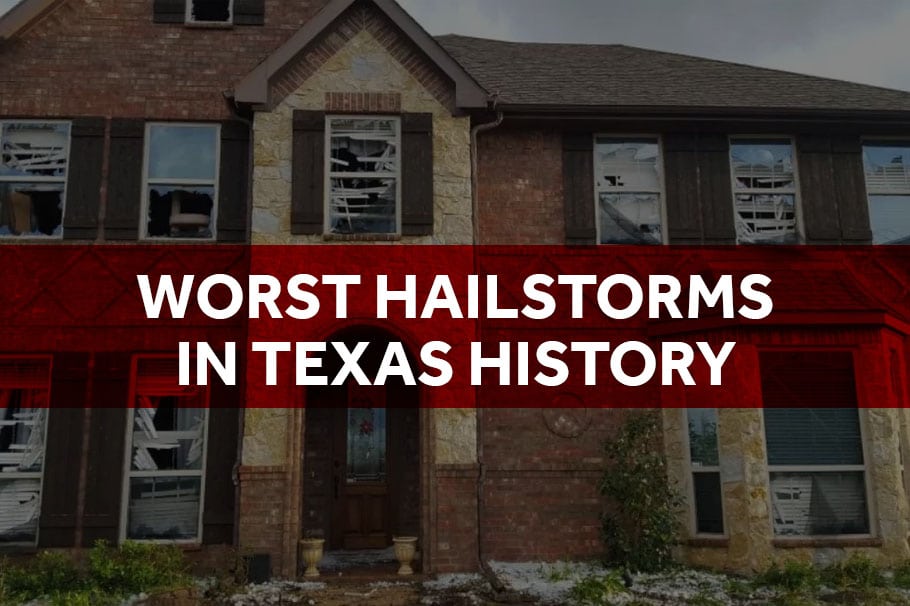 As the saying goes, “everything is bigger in Texas,” but that might not... 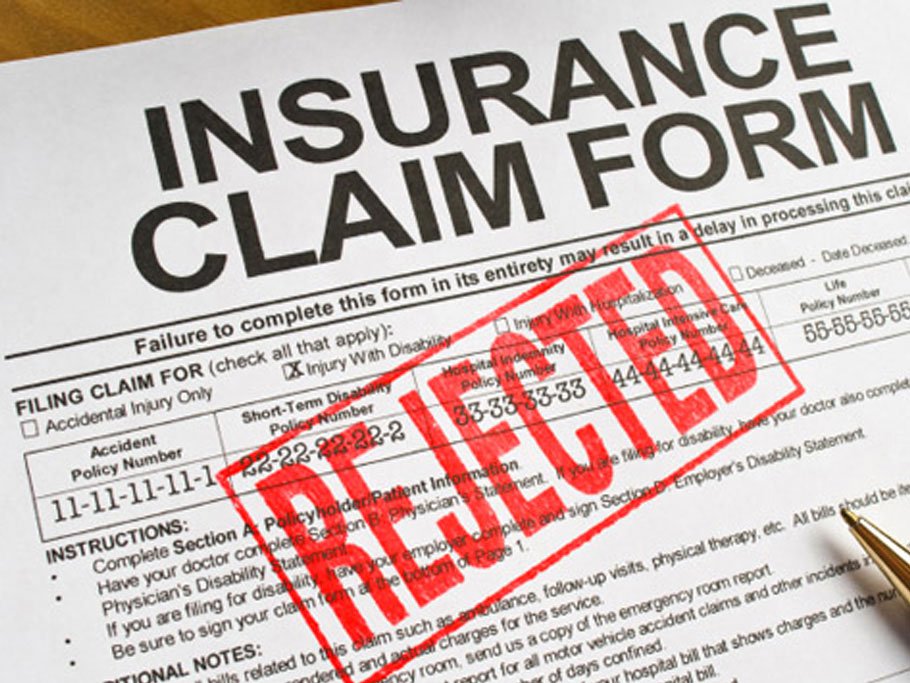 For Texas Homeowners, These Are Your Insurance Bill of Rights 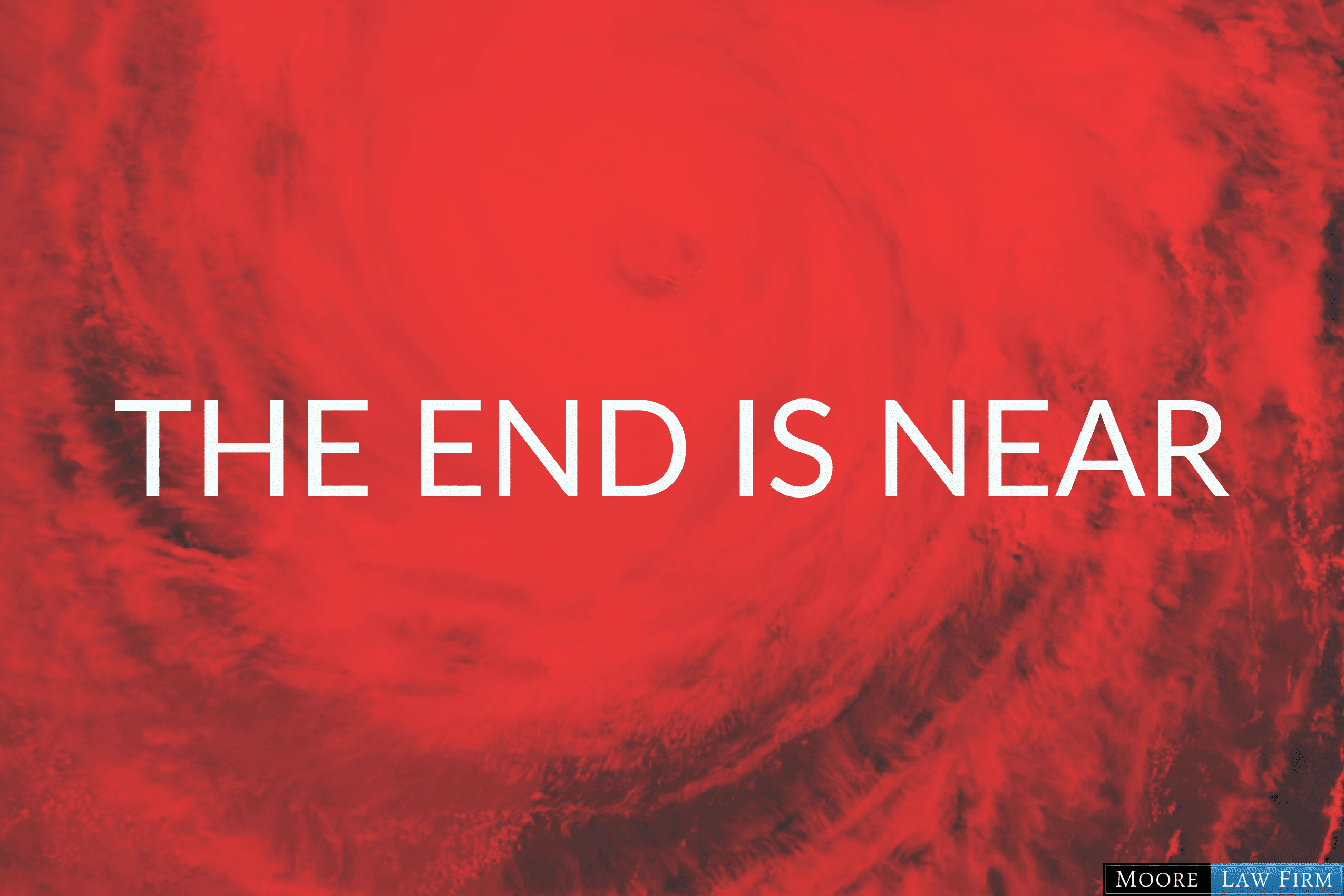 The End Is Near: Hurricane Harvey Lawsuit Deadline Is Approaching 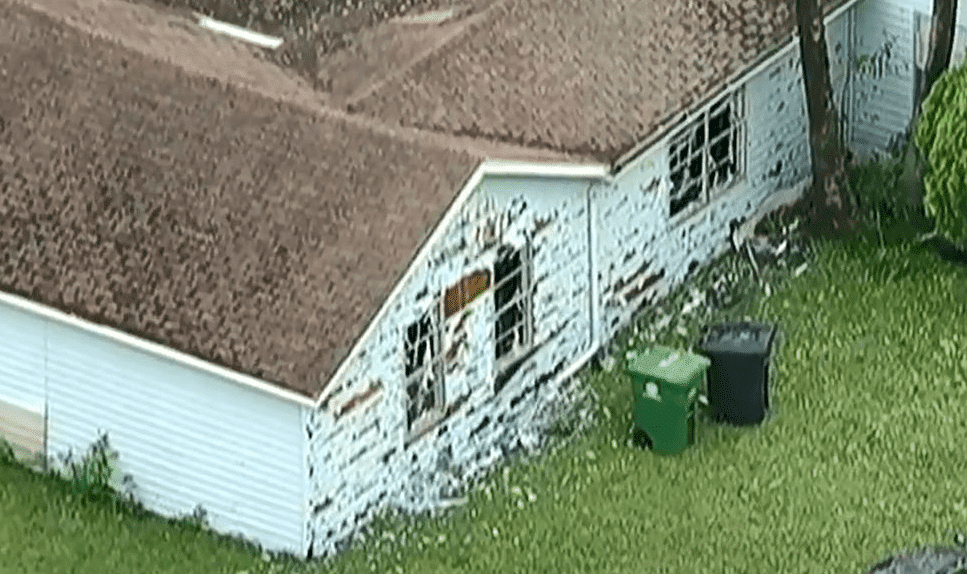 Neighborhoods in all over Houston were hit with softball sized hail leaving a path of...